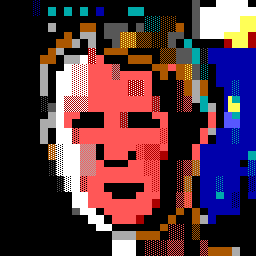 For as long as I can remember, I've been fascinated by type, fonts and printed materials. Growing up during the eighties, I spent my childhood playing with font stencils, label makers, font stickers and finally typewriters; a fantastic tool offering a wide range of opportunities at the time. Not only was I typing a lot of text, but also experimenting with character combinations to obtain new and original glyphs. From there grew my love for monospaced fonts.

Despite the fact I didn't own a computer until 1990, I've been exposed to text terminals and PC's 80x25 text mode monochrome displays since the mid-eighties. I would just sit in front of these screens, spending hours drawing labyrinth grids and various kind of frames in a text processor, using the extended ASCII box drawing characters. I would also print some of these drawings using Dot Matrix printers, which made it possible to print most ASCII characters at the time. Those were also the golden years of the French Minitel and although there never was one at home, I was able to access one through other means: this was literally a game changer, as it offered richer display capabilities compared to text terminals, and one could start imagining drawing more complex pieces out of text characters and fat pixels.

Further opportunities arrived in 1996, the year I received my first modem. I discovered BBSes and most importantly the Artscene: an online community of people dedicated to create text mode artwork using ASCII characters and ANSI escape codes. This was fascinating to me; I had to be part of it. Without realizing, I became a digital artist drawing ASCII and ANSI pieces (primarily logos), and bitmap fonts. I was also involved in the Demoscene. Those are arguably some of the best years of my life. The paradigm of ASCII and ANSI art was very similar to what I always been doing: drawing letters and logos out of text characters. It is the ultimate recursion, a return to the essence of type. This art-form is a challenge in itself, one which is constantly pushing a media which had not originally been designed for this purpose to its limits in order to achieve visual aesthetics, way beyond its original constraints and scope.

Lately, after drawing ASCII and ANSI art for over fifteen years, I've been turning myself to Teletext, a media offering a similar manner of expression, only with a more global and broadened audience.