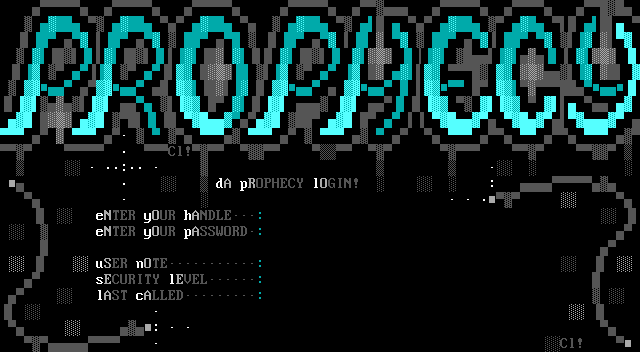 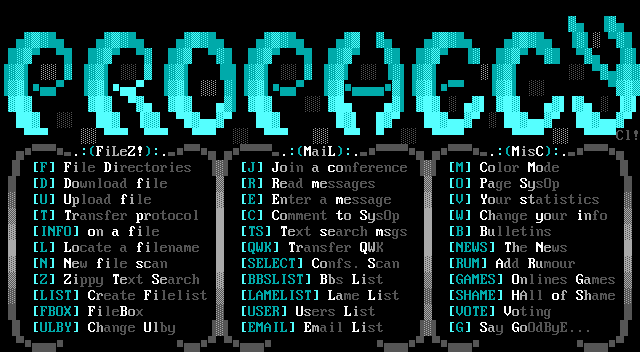 This page is dedicated to my BBS system, called "Da Prophecy", which was running from June 1997 to December 1998. BBSes were privately ran computer systems offering message bases, files and online games, accessible by a modem over a standard phone line. My system, oriented in Demoscene, Art, Music and Coding, was mostly a message board with very active local conferences. If you want to check how the board looked like back then, you can download an archive containing all the art drawn for it, along with BBS Intros and various adverts. You can also download the BBS Intros individually: BBS Intro #01 (Video) coded by Arrakis (November 1997) and BBS Intro #02 (Video) coded by ONC (April 1998).

I got my first modem on May 29th 1996 and started calling BBSes in my local area from that date. The first BBS I ever called was "Morte Lune", on May 30th. In April 1997, I started to call long distance boards and discovered my first scene BBS: "Dream Mountains", which was running a wicked PCBoard setup with awesome ansis. I was also a frequent user of these fine scene boards: "Data Crawler", "Divide By Zero", "Equalizer" and "Planet Mars", all running very nice looking PCBoard setups. Over this time span, I've made a lot of contacts and experienced the global dynamism and attracting effect revolving around those underground communities, which eventually made me join the scene and take part in artscene and demoscene.

For files and resources about the French BBS Scene, you can check the (French) BBS and Minitel Archives.

If you are interested about BBS history, Jason Scott of textfiles.com released a 3 DVD box documentary called "BBS Documentary". Here is an interview from him, explaining what the documentary is all about. The documentary is now available on the Internet Archive, and the original DVD images are also freely available for download.

Lastly, you can also listen to "Paging system operator" from the late nineties band Barcelona, released in 2000 on their "ZeRo-oNe-INFINITY" album to complete the journey.

Da Prophecy is finally online! Running a fully modded Remote Access setup. Although it came pretty late, activity was fantastic, with peaks up to 40 calls a day and tons of messages in the local bases. The final backup has unfortunately been lost during a crashdisk in October 1997. Hopefully, I had a backup elsewhere, but dating from June 23th, so reported calls/downloads statistics period is only 2 days worth :( Fortunately, the message base had been almost fully saved in a QWK packet before switching to PCBoard in August 1997, and one of my cosysops had backups from all messages, so the message counting should be fairly accurate.

Switched to PCBoard + QFront! All the ansis were changed, and the Ravnet message network was relayed. The local conferences remained very active until the end, although they had some slow months during the December/January period. The most active message writers were FTN Points, so the board received more mailer calls than BBS calls. Unfortunately, there was a gap in the mailer logs so the calling statistics aren't accurate. Despite a high level of activity, I decided to close the system in late June 1998, exactly one year after its opening, because of some personal issues at the time.

Back online after 6 weeks of downtime, running a new setup built from scratch with an upgraded PCBoard version, new ansis and new local message bases. The hardware was also upgraded, as it was running on a Cyrix P200+ box. At this time, the Ravnet message network died, most of the boards carrying it were closing down, and the French BBS scene was almost completely dead. As the board didn't carry any networks, mailer support was dropped, resulting in no support for FTN Points. It later carried CCI message network, with FTN packets feed by Internet. There wasn't much activity anymore, as most of the users never came back, and the BBS closed forever in December 1998 as it hardly got any calls in the last weeks of its life.

Running on a Cyrix P200+ under Windows 95 powered by a 1200Mb Quantum Fireball HD and an USR Sportster Vi 33600bps external modem.